No surprises that the Park was full of riders on what was probably one of the best days of weather all year. Not too hot but warm enough for racing in a short sleeved top. With a full program of races we’ll just get straight in their with the action.

Men's Sprinting had an A, B and women's competition. The women going to a straight final which was won by Emma Patterson, from Rohan Battison and Jayne Paine third.

The A sprint saw divisional champion Rob Drinkwater up against this years league B category winner under 16’s rider John Paul with last years B category winner Eddie Sobieralski… all of whom won their heats to get to this final. Drinkwater took the front and kept the pace steady but then gave it full gas on the 200 metre mark with Paul on his wheel and Sobieralski following suit. Drinkwater held it all the way to the line but Paul lunged at the finish and the commissaires gave it to Paul. The crowd had it the other way round it was so close. 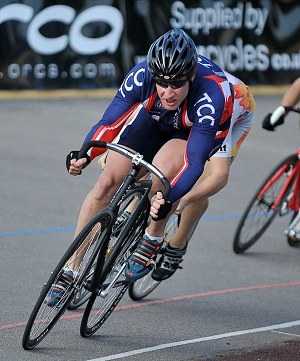 The Youths were sprinting too and in a battle that has raged all season at league night, it was Daniel Maslin who beat Cameron Swarbrick in the Under 14’s, with another Daniel, Dan Lansley who beat Max Stedman in another close finish.

The senior got up for a warm up 10 lap Scratch race prior to the Bordeaux –Paris qualifying, and it was Under 16 rider Felix English who took line honours in the A’s with John McClelland and Adrian Adgar in 2nd and 3rd.

The B’s result saw Rob Richardson avoid a chain dropping moment by Nick English to finish ahead of John Paul with English rolling over the line for third.

The 20 lap qualifying race for the Under 16’s / Women saw some great riding especially from Emma Patterson who qualified 4th behind winner Stephen Bradbury and when it came to the 15k Derny paced final, Patterson improved her placing to third behind second placed Bradbury but the winner was a very fast moving Matt Gittings. 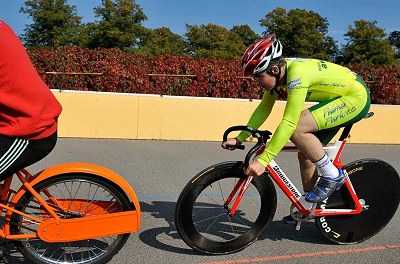 The Senior A’s Bordeaux –Paris qualifying saw a momentous battle for the eight places in the final but after 40 laps their were over 20 riders sprinting for the line. The judges took what seemed like forever to pick out the finalists but when they did it was Ian Greenstreet who took the line honours, but then down to the rest to sprint for the minor placings, where Sam Sturgeon roared away to win with Trevor Bradbury second and Rob King third.

The 30k Bordeaux- Paris Derny final saw a very steady pace for the first 45 laps but then a battle royal within the last 15 laps as John McClelland and, recent return from injury, Chris Legg whipped the pace up to a frenzied 40 miles per hour scorcher and coming into the final lap either rider could win. But it was Youth over experience in this case with Chris Legg just too quick over the last half lap for McClelland, and Legg took the win, with Under 16’s rider, Felix English, finishing third. 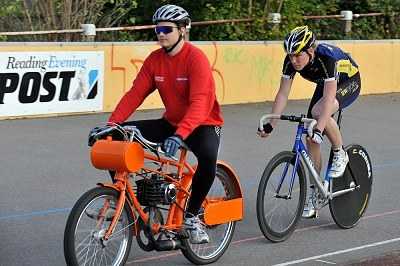 Chris Legg back from a collarbone injury , winning the A’s Bordeaux- Paris event.

The Youths had a few more races thrown in during the day and it was victories in the 6 lap Devil for Daniel Maslin (U14’s) and Max Stedman (U12’s) and they were to repeat their victories in the 10 lap scratch later that day.

With time left for one last all riders in, 20 lap Scratch race, it was a similarly furious paced race that had many riders pulled out fairly early on, especially after their was a from the gun attack from David Jack. He was brought back after 4 laps but the damage to the field had been done and when the pace went on in the last few laps. The field had been whittled down to just 8 or 9 riders.

The final rush for the line had John McClelland take victory from Ian Greenstreet with Chris Legg third. 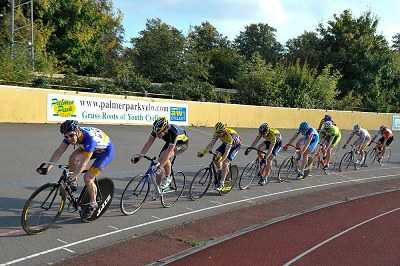 Ian Greenstreet keeping the pace high in the 20 lap Scratch , where he would finish 2nd to McClelland (in 5th place here)

Stephen Bradbury held off Rob King for the B’s prize and Jayne Paine won the Women's race from Rohan Battison and Emma Patterson.

A huge thanks to all commissaires and marshals for giving up their time on a sunny Sunday afternoon. Thanks to Guy Swarbrick for his images of racing all season.

See you next year!!