Just a quick note about the 3rd round of the Rollapaluza Winter Series 2010/11.

V and I met up at the Carnivale Bar E1 to ride the kilo Rollapaluza event. Matt D came along to support but he was soon struck by the roller bug and was keen to get involved.

Although the event was not attended in the usual numbers, the racing was competitive.

I was first up to race in the qualifier and although I was pipped on the line, I posted the 2nd fastest time of 50.16 to earn an easier draw in the next round. V breezed the qualifier with a time around 55 secs beating the next quickest rider by 3 secs and beating a number of the mens times. Matt did a steady qualifier coming 5th overall.

Matt's next race unfortunately was his last of the night as his time deteriorated to 56 secs.

V was awarded a bye to the semi-finals as the exertion of the kilo proved too much for some riders. Unfortunately the mechanical gods were not in V's favour at this stage of the evening. Her foot had come loose from its binding early into the race and although leading throughout, the handicap of not pulling up on one pedal meant that her opponent was able to prevail. V went on to win the bronze in the 3rd/4th ride off with ease.

I started the quarter-final with a false start. Another one that evening would result in disqualification. Having produced a clean start on the second attempt I went on to win the heat. Unfortunately the timing system failed but it felt quick.

In the semi-final I was up against Matt Theobold, the Rollapaluza champion of 2008/09 but someone I had beaten previously over the kilo distance. I started well and took the initial lead but this was not to last. My support team (V and Matt) screamed that my lead was shrinking and that I'd have to make a move. A brief look over my shoulder and I saw that I had 600m to go. This was too soon to go all out as I would never last to the finish. I waited to the 500m mark but my opponent responded. We were neck and neck. My best efforts, however, were not enough and I was pipped on the line by just 0.2 secs and by the fastest time of the night 48.91. My 3rd/4th race off was equally tight in the early stages but on this occasion I was able to pass my opponent as he faded in the final 100m to the line.

The TCC Results on the night: 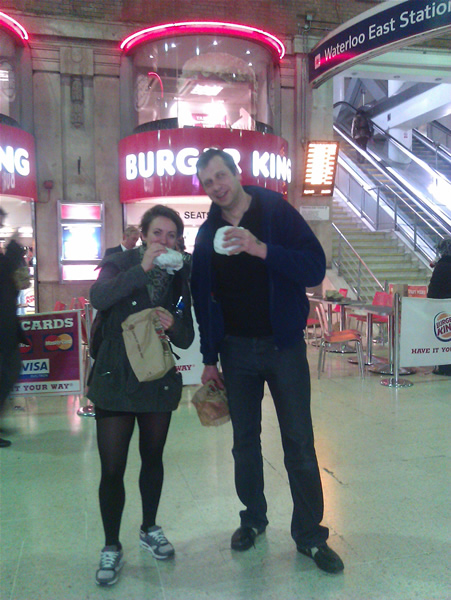 V and Darren enjoying a victory burger with their nights winnings at a well known burger outlet.