The 8th round of the Central Cross League was the Progression Fitness cyclo cross held on November 27 at Newbury.

A super-charged exciting afternoon whizzed passed, with some yet again high drama and fiercely won heats, leading to the coronation of a new TCC 'Queen of Cadence' - our young talented Wiesia Kuczaj (aka V), and the toughly fought retention of the TCC 'King of Spin' title for young Mr Darren Paice. 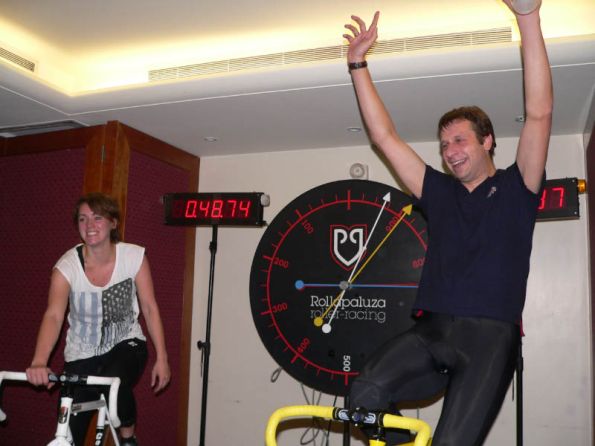 Both winners had to fight off some fabulous contenders for the throne and wasn't it great to see such fantastic performances by TCC guest, Nikki Croxford and Oliver Newlan in the respective 'mean' (in lots of ways!) 1000m finals, preceded by 'upping the ante' semis' protagonists Jo Foster and Tom Sutherland.

It was a treat for us, to not only have young people attending, but actually having a 'rollapaluza' go, so it is with great pleasure that I announce our new Rollapaluza Princess, Laura Findley (aged 12) and Prince of Spin, Patrick Halpin (aged 5).However, the biggest, heart-warming beam of wondrous delight at just being sat on a Rollapaluza bike came from Joel Rush, aged 4.

Some Dates for your Diaries

Stefan Zurakowski will be giving massages most Tuesday nights through 'til Xmas.
There will be a booking sheet on the sign on table, the time slots are 8.30, 8.50, 9.10 and 9.30.