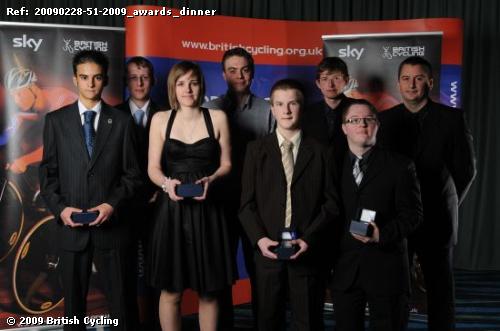 In a busy weekend of racing, our Ladies were in individual action at Milton Keynes on Saturday. Tina Reid, Wiesia Kuczaj, Lisa West, Jo Foster, Martha Grekos, & Gabby (a new recruit) took to the road, with Jo finishing a creditable 8th place. Unfortunately, the shine from Jo's performance was taken away with the news that Martha had broken her elbow in a crash during the race.

Will McFarland & Dave Seymour rode the 4th Cat event, with Will taking 44th, and Dave 56th again in a field of almost 70 participants.

The Surrey Rumble - Twickenham CC's Cyclosportive in aid of The Dave Rayner Fund - took place in dry and comfortable conditions on Sunday. The 2 routes (57 & 77 Miles) covering over 80 miles of Surrey & West Sussex's most scenic terrain saw 215 riders take part. Many took the ride as a serious early-season leg stretcher, whilst others just enjoyed riding the quiet picturesque lanes.

Rob Archer & Mark Spindler were despatched early to check the route signage from a riders perspective before the main event started.

Barbara Vance, Lisa West, & Dorchie Cockerell's Sign-On worked like a dream to process all of the riders, and issue them with Maps, Numbers, & Rider Cards, all with the minimum of fuss. Ann & Mike Cater were busy brewing Tea, and preparing fine fares for the riders return. Dave Peck & Michael Keohane were out safety checking a tricky part of the route, John Wilson, & Tom were directors of the parking operation before assisting Darren Paice with group segregation & Starting. Rob Spindler was seen selling energy bars, & pick-me-ups, before packing his car ready for the trip down to the Manor Farm checkpoint, and Mac was putting up banners, easy-ups, and all manner of other things. John Scott, Mac, & Dave then took themselves off to Whitedown to monitor (and pick up the pieces) at the bottom of the tricky descent.

We decided that it would be wise to bring the start time forward by about 15mins to ease congestion at HQ, so off they were packed by Darren, in groups of 20, hopefully to return safe & well a few hours later........

An early phone call of a rider in distress did nothing to calm Big Des down, but at least the rider was safe & well, and she enjoyed Tea, flapjacks, & a gossip with the Ladies back at HQ after being rescued by the gallant "Scherrit of The Bike Whisperer". This after being ignominiously snapped by our event photographer, Phil O'Connor, carrying her twisted steed uphill on her shoulder.

Alongside The Bike Whisperers Spares stall staffed by Corrine Knoesen, Mike Clark from Sport & Publicity arrived & set his stall up selling Cycling related Books, DVD's Videos, etc, and hung some posters around the HQ walls, which created a great atmosphere in the Hall for the returning riders.

Another few phone calls from riders ensued, again, thankfully none were serious incidents.

With things quiet at HQ, John & Tom went out and began the long and tedious process of removing the route signage, that had been lovingly prepared by John Scott, John Warnock, John Andrew, Dave Peck, Dave Seymour, Doug Collins, Kevin Bird, & Yours Truly the previous afternoon.

Denise Quinlan arrived to set-up her massage table, and over the course of the afternoon, a steady stream of sweaty middle-aged men were administered resuscitative treatment, sometimes with her hands, sometimes with her knee in their backs. It was entertaining viewing from afar!

The Riders returned - some in groups, some alone, some grumpy, but the vast majority were mightily pleased with their achievements, and praised both the route, and the navigational aids that were provided. Praise was also heaped on the checkpoint staff at Fishers Farm. With Dave, Rob, & Michael present, I'm sure there wasn't a dull moment, I think we should have sent a TV crew down there......maybe next year.

The Human gene-pool would not miss the presence of the person who found it funny to turn one of our direction arrows through 90 degrees towards the end of the route - if they had ANY intelligence, they would have vandalised BOTH of the signs at that junction, rather than just doing half of the job. Still, their selfish actions did enough to disrupt many of the riders, who missed the turning and went off course.

Of the 215 starters, there were 5 official DNF's, 37 who did not officially check back in at HQ, 124 who completed the Long Course, and 49 competing the Short Course. The fastest Long Course rider competed the circuit in an admirable 4 hours exactly - good riding that......

Once all the riders had been through, Dave & Michael left their checkpoint to finish off the removal of route signs, ably assisted by Doug Collins, and the HQ was efficiently cleared & cleaned - you'd hardly notice anyone had been there!

All in all, a great day for the majority of the riders, whose positive feedback has been arriving in my inbox in a constant stream today.

Big Thanks to ALL who have helped out at the event. and prior to it.

Event's like this really DO raise the Club's profile, especially with our neighbours, and it was a real pleasure to see so many Thames Turbo's, Kingston Wheelers, Pearson's riders in attendance. On a personal note, I was thrilled that there was a good turnout from the Dulwich Paragon CC, who promote the famous Ride of the Falling Leaves each year, I hope they enjoy our sportive as much as we enjoy their fine event.

Anyway, that's it for another year, just a few administrative duties left to perform, and quite a few coins to lob into the Club's coffers - Oh speaking of which, an early prediction for our donation to the Dave Rayner Fund is one of around £400, so all in all, a great day's work for the Club.