The Tour of Cambridgeshire 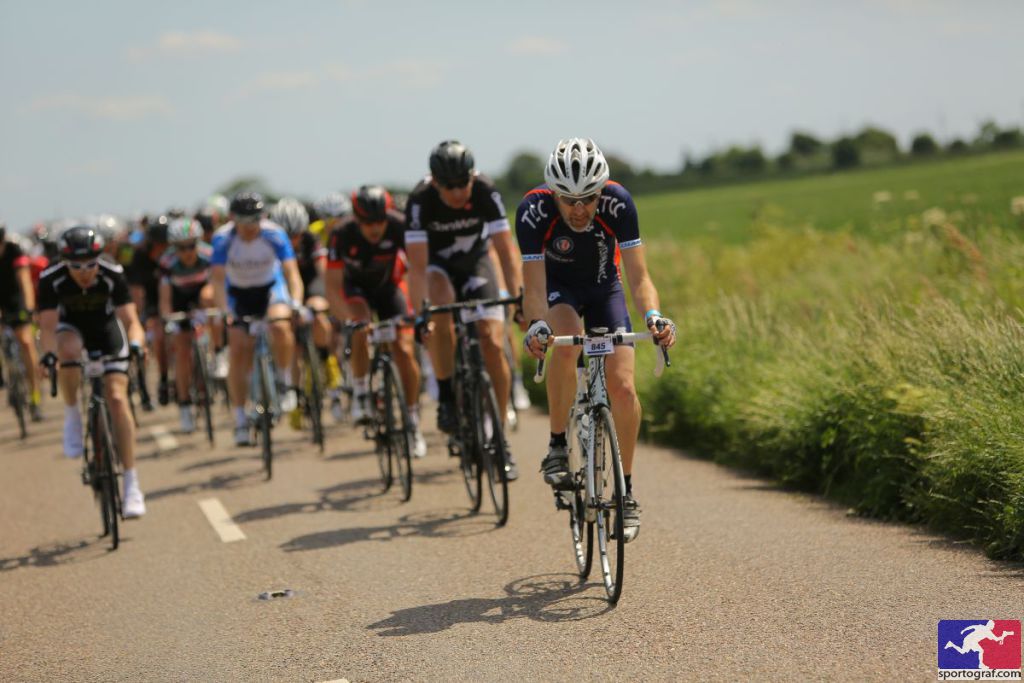 This was without doubt this was the best experience of road racing I’ve had to date.

Their aim was to create a ‘pro’ experience so with fully closed roads, neutral service cars, photo motos and even camera drones flying by it made an exciting race (not to mention the sun!). In fact it was the UK’s first ever Gran Fondo which meant all 6,000 riders were timed from the gun with the first past the line, 82 miles later, the overall winner.

I managed to get in Pen 1 which was at the front, although my wheels still only started rolling about 2 minutes after the gun as everybody fought to squeeze out of the gates. The next 45 minutes were fantastic; absolutely full gas; weaving through riders on undulating roads with a monster tailwind to boot. Myself and fellow TCC member, Steve Home, managed to get within sight of the leading group but then there was an almighty crash on a fast, sweeping, off-camber left-hander with rider after rider flipping over the verge into the ditch. It brought us all to a stop and this decided my race from then on (Steve said he managed to avoid it enough to sprint back on). We tried to catch the next group but the groups were massing into large groups of riders making it virtually impossible to move between them. However, that didn’t stop the enjoyment.

Having said that, our group of about 40 riders didn’t work particularly well together, with most just wanting to sit in while a few of us worked hard at the front. This continued for an hour or so until we were absorbed into a swarming mass of a few hundred when we were caught by our chasing group. Although I was a bit disappointed at the time, the catch happened just as we went up onto the windy Fens which meant we could now pick up the pace along the wide straight roads, such as the 10km long Forty Foot Bank. It was at this point it felt like we were in the Tour de France with every inch of tarmac being taken up.

There were still quite a few crashes causing splits so I fought hard to make my way to the front, and stayed in the top 20 of this massive group right until the finish. At one point I had an ego-maniac moment when I was pulling right on the front – I looked back and saw a huge snake of riders, stretching up to quarter of a mile back, all following my wheel like a train (Of course it doesn’t last long but it felt damn good!)

The final 30 minutes meant we dropped off the Fens and back on to some quite narrow, rough country roads. I got caught behind a really lethargic rider as the road narrowed further and lost about 30 places which took me a while to make back up (mostly sprinting out of the corners). With 5 miles to go, it was on a tight corner that I tried to jump clear with one of the more vocal riders. It turned out he was more into issuing orders than acting them out and he soon pealed off. I tried again closer to the finish and a group of about 10 of us managed to break clear and fight it out to the sprint. I finished 30th in my age group (40-44), 175th overall meaning that I have qualified for the UCI Amateur World Road Race Championships in Denmark later this year in the Masters C category.

If you’re keen to improve your cycling – set a better time for your next sportive, try out racing, or simply learn how to ride in a group then come on down. All are welcome on a Saturday morning (there’ll be someone on a rota to look after you!) or come along on a Tuesday evening for cake and a chat.

There are no upcoming events.